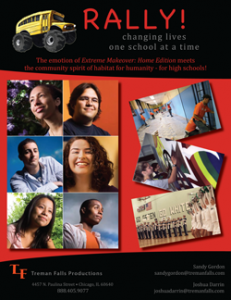 The scene – Standing at an educational conference outside of a hotel in Florida mixing with the other attendees. While standing in line to grab a drink, it occurs to me that someone should produce a television show that does for America’s public schools what Extreme Makeover: Home Edition does for people’s homes.

First, I made a few calls because many ideas cross my mind. I find it useful to run them by friends and family as a sounding board. It helps make sure I am grounded in reality and that an idea has merit. After some positive feedback, I called my good friend and the only freelance producer I know with the ethics and expertise to help make it happen – Sandy Gordon.

Over the course of 5 years, Sandy and I, with no prior experience writing and pitching shows, managed to

Sandy produced this video prior to the pitch at NATPE 2009.